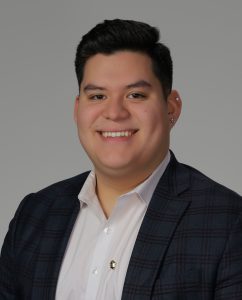 Alpha Chi Rho National Fraternity is happy to announce the hiring of Brother Nicholas Ramos, (ΘXΦ, ’20) as a Leadership / Expansion Consultant. Nicholas “Nick” will begin this position in August 2020. The Leadership / Expansion Consultant supports Fraternity operations by functioning as the initial and primary contact for Chapters, Colonies, alumni associations, and campus officials through travel and routine methods of communication. Nick’s focuses will be on Alpha Chi Rho’s Colonies at Towson University and Coastal Carolina University, and the communication and support for the resident Chapters.

Nick is originally from North Brunswick, NJ and graduated from Montclair State University in Montclair, New Jersey with a Bachelors of Arts in Communication and Digital Media.

Nick has decided to go by Ramos as there are many “Nicks” in Alpha Chi Rho, and he is super excited to be a part of the Headquarters staff. He joined the Chapter in spring 2017, his second semester at Montclair. His Fraternity experience has been nothing but incredible and led him to other leadership opportunities both on and off campus. He is ecstatic to be your Leadership Consultant, work on expansion and provide resources and tools to Chapters and Colonies of Alpha Chi Rho. Nick has an interest in going into Higher Education for his Master’s Degree and eventually work in Fraternity and Sorority Affairs, but it is still too early to tell especially with the ongoing pandemic. He also looks forward to when we are able to meet in person.

Outside of the Fraternity, Ramos loves spending time with friends, going on hikes, going out, traveling, listening and playing music (he plays four instruments), playing video games, volleyball, scrolling social media for hours, making playlists for all types of occasions, exercising and yoga. He is currently planning a trip with one of his good friends to visit Germany, Belgium, Switzerland, England, and Ireland, once it is safe to do so.

The National Council and Staff are very excited to have Nick join the team. To contact Nick, please email him at nramos@alphachirho.org.