The Alpha Chi Rho Educational Foundation cultivates academic excellence and leadership development through financial assistance and program support for the educational pursuits and initiatives of the Brothers, Chapters, the National Council of the Fraternity of Alpha Chi Rho, and other students. The Foundation fosters lifetime commitment to personal enrichment and community service by members of Alpha Chi Rho as Men of Word and Deed.

Services to the member and the Chapter 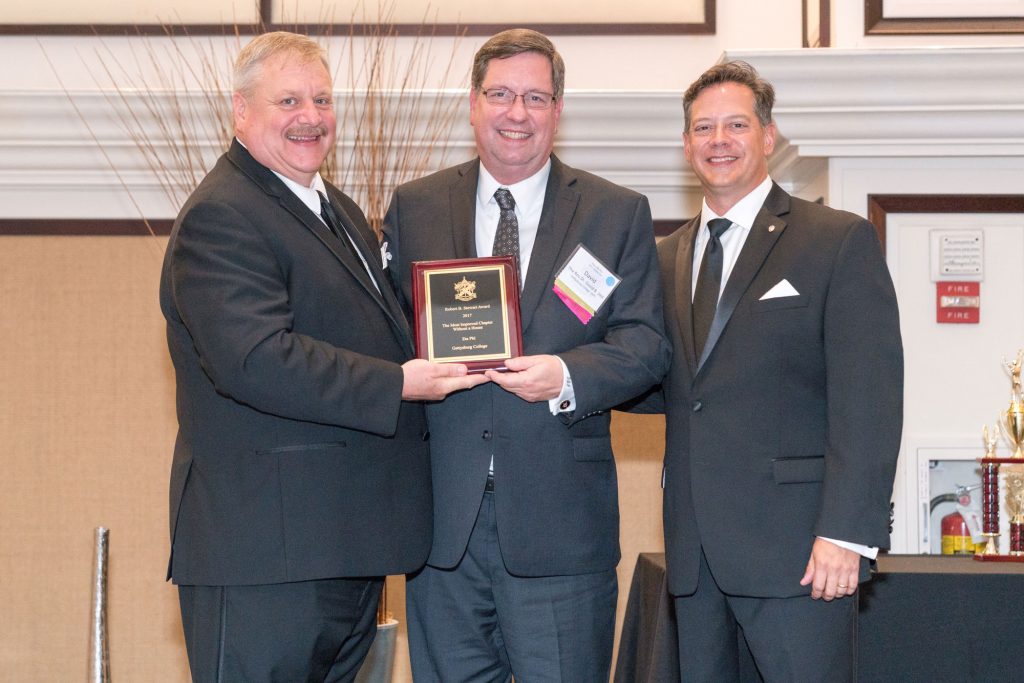 In 1948, a group of Alpha Chi Rho Brothers decided to start the Alpha Chi Rho Educational Foundation. A committee was formed under the skilled chairmanship of Walt Patchell who made the survey and recommended the plan. William H. D. Cox and F. Prescott Hammond coordinated the legal requirements and specifications. Amos Horlacher engineered the mechanics of scholarship operations. The Alpha Chi Rho Educational Foundation was incorporated, under the laws of Delaware on the 11th day of August 1950. The first meeting of the incorporators was held on August 22, 1950, Maron E. Turner, Gordon Patterson, and Bayard W. Allmon. At this meeting was determined that there should be twelve Trustees elected to the Foundation. The second meeting of the incorporators was held on March 17, 1952. The first Trustees elected were: John R. Hunter, Wilbur M. Walden, Carlton J.H. Hayes, and William H.D. Cox – to three-year terms; P. Ormond Milton, Amos B. Horlacher, Walter W. Patchell, and F. Prescott Hammond – to two-year terms; and Horace R. Bassford, Frank E. Masland, Jr., G. Alfred Palmer, and Theodore Seidel – to one-year terms. The first meeting of the Trustees was held on May 17, 1952. The first officers of the Foundation were elected: F. Prescott Hammond, Chairman of the Board; John R. Hunter, President; William H.D. Cox, Secretary; Walter W. Patchell, Treasurer; Wilbur M. Walden, Manager; and Arthur F. Searing, Comptroller. At this meeting, Trustees, Carlton Hayes and Frank Masland resigned and with the death of Horace Bassford, three new Trustees were elected. They were: Richard R. Conant, Dr. Ramsey Spillman, and Dr. William Edel. The Committee on Grants, Aids, and Awards was created with Wilbur M. Walden and Amos Horlacher as members with the power to appoint other members, at least one of which is to be a lawyer. The first membership meeting was held on May 17, 1952. The first members of the Foundation (those Alpha Chi Rho Brothers who contributed to the Foundation) were Richard R. Conant, William H.D. Cox, F. Prescott Hammond, Amos B. Horlacher, John R. Hunter, Jr., Walter Patchell, William Wahl, and Wilbur M. Walden.

The first solicitation letter went out to 300 Alpha Chi Rho Brothers in September of 1952. At the Trustee meeting on February 6, 1963, it was voted that $800. be made available to students. The first grants to students were not to exceed $50 and the first loans to students were not to exceed $100 (total not to exceed $650). On October 26, 1953, Robert B. Stewart was elected a Trustee. On April 8, 1954, the US Treasury Department notified the Foundation that it was exempt from federal income tax and that contributions made to the Foundation were tax deductible. At the Trustee meeting of June 6, 1954, William H.D. Cox resigned as Secretary and the Honorable Stanley G. Bedford was unanimously elected to fill the vacant post. During the Trustee meeting of September 11, 1954, Paul K. Addams was elected as a Trustee. The Hunter Fund was established on January 17, 1955 with a gift of $257 from the employees of Hunter Cardwell & Co. (architects) to start a scholarship for students pursuing a curriculum in architecture.

The proposed emblem of the Foundation, a crook with a right hand extending across the staff, was approved by the Trustees on June 28, 1955. In 1955, membership dues were $5 and lifetime membership cost was $200. In 1956, the Foundation made its first investments by purchasing twenty shares of General Motors stock and six shares of AT&T stock. F. Prescott Hammond passed away in 1956 leaving a bequest of $300,000 to the Foundation. Money and securities were received in 1957 and under the wise, financial guidance of Arthur Searing, the Foundation became strong. Student loans were increased to $600. By 1962 there were 126 student loans outstanding, totaling $45,225. The first Chapter mortgage went to the Phi Iota Building Corporation (Allegheny) to help purchase a new Chapter house, secured by a second mortgage, to be paid back over twelve years. Student loans increased again to $1000 by 1964 and there were 175 loans totaling $90,000. In the 1960’s, the Foundation started giving library awards to Chapters which exceeded the all men’s grade point average. They were the same as they are today: $100 for the first year, $200 for the second year, and $300 for the third and subsequent years. Solicitations collected totaled around $2000.

On January 24,1972, Paul K. Addams was elected Chairman of the Board and served for fourteen years. In July 1972, Wilbur “Curly” Walden died and left $13,000 to the Foundation. A memorial fund was established in his name and contributions were solicited. His fund grew to $25,000 and the Curly Walden scholarship was formed. The Foundation began to overwrite a portion of the Leadership/Scholarship Institute (not to exceed $1000) and all the regional conclaves. Michael R. Fuller received the first Curly Walden Scholarship on August 24,1974. The James B. McFadden Fund started with $26,000 – turned over by the James B. McFadden Memorial Foundation. Henson W. Watchorn was named the loan manager to process and collect student loans. The net assets of the Foundation surpassed the $1,000,000 mark. The Curly Walden Scholarship was increased to $2,000. Students could now borrow up to $1,500. Yearly solicitations raised over $6,500 per year. The Foundation added new services: a qualified Scholarship Advisor was paid $200 per semester; the Foundation paid the initiation fees for Brothers elected to honorary societies; and the Foundation reimbursed Chapters up to $400 for community service projects.

In 1979, the Headquarters Committee established a proposal to purchase a National Headquarters building. Richard Conant, in 1980, retired as Treasurer and Nelson Littel, Jr. replaced him. As the Foundation entered the 1980’s, its assets reached $1,200,000 and outstanding loans were $344,800 and mortgage loans totaled $153,000. On October 26, 1982, the property at 109 Oxford Way was purchased for $125,000 to serve as our National Headquarters. The name “R.B. Stewart National Headquarters” was given in honor of the man who was the driving force behind the acquisition and the largest contributor. In 1982, W. Henson Watchorn was named Assistant Treasurer and was assigned the duty of collecting student loans. Richard V. Olsen died in 1983 and left $35,000 to the Foundation. The Committee on Deferred Giving printed and mailed an appeal in May of 1984. Also, James McFadden’s mother-in-law added $20,000 to the McFadden Fund to establish a scholarship in his name. The Alpha Chi Rho Educational Foundation was incorporated in the State of New Jersey on September 13, 1984 and the R.B. Stewart National Headquarters was made exempt from property taxes in Neptune Township in November of the same year.

Brother Stanley G. Bedford became the Chairman of the Foundation when Paul K. Addams retired on January 8, 1986, after fourteen years as Chairman and thirty-two years as a Trustee. Weston L. Dangler was appointed as the Foundation’s first Executive on October 1, 1986. He was succeeded in 1991 by Scott A. Carlson. Jay Anhorn became the first ever Chief Operating Officer of the Foundation in 2016.