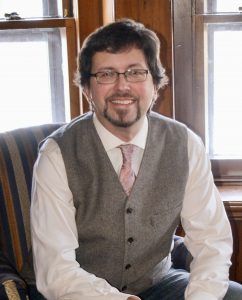 The National Fraternity of Alpha Chi Rho, Inc. announced the appointment of Brother Michael Chiulli as Scholarship Officer of the national organization.  Brother Chiulli of Yonkers, New York, is a 1983 graduate of Catskill High School. Thereafter, he enrolled at the State University of New York (SUNY) in Geneseo and was Initiated into Alpha Chi Rho, Phi Zeta Chi in the spring of 1985. He graduated in 1988 with a Bachelor of Science degree in Biology. After graduation, Brother Chiulli worked for many years as a clinical/research tech at the University of Rochester’s Infectious Diseases Unit, where he notably did work for the AIDS Clinical Trials Group and the AIDS Vaccine Evaluation Group. During this time he received a Master of Arts degree in Biology from SUNY Geneseo in 1998 and a Master of Science in Education from the University of Rochester in 2002. Since 2002, Brother Chiulli has been a high school biology teacher.

Please join us in welcoming Brother Chiulli back to the National Council of Alpha Chi Rho.