A little over a month has passed since the death of George Floyd and the country has been in a state of unrest. The Fraternity again extends its deepest condolences and prayers to not only the family of George Floyd but also to every individual who has been affected by systemic racism. The National Fraternity has supported and championed its resident Chapters who since May have been joining peaceful protests, sharing important resources on social media, joining on-campus coalitions, and hosting fundraisers. Below are a few of the Chapters and Colonies that have hosted fundraisers over the past month.

The Phi Zeta Chi Chapter at SUNY Geneseo within the first week of protests rallied its members and donated $1000 to the NAACP Legal Defense Fund. The outpouring was so great that the Chapter decided to host an additional fundraiser for the Rochester Legal Defense Fund which raised $270. The Chapter when posting the donation and next steps for individuals said, “Alpha Chi Rho, like many in our nation is calling for change. Change that involves more than just those who will benefit from it, but the collective action of all. Our Fraternity was founded on the idea that Brothers will judge ‘not by externals, but by intrinsic worth’ and our ‘insistence on a high and clean moral standard.’ We feel that the current moral standard across this nation needs to be raised.”

At New York Institute of Technology (Eta Chi Phi), the Chapter hosted a fundraiser for the Black Lives Matter organization. Over the course of a few days the Chapter raised $233. In posting the donation, the Chapter said it, “stands with the black community and all people of color. We have said this before and we will say it again. Judgement should not be based on externals but by who someone is as a person.”

At Rowan University (Iota Chi Phi), the Chapter worked with their alumni to donate $1000 for the George Floyd Memorial Fund. This fundraiser was the idea of spring 2020 Postulant Kezhaun Brown. When the Chapter posted the donation on their social media, Kezhaun said, “The George Floyd Memorial Fund was important to me because as a young black man it hurts to see another life lost when it could have and should have been easily avoided. Being able to show any type of support was very important to me and I’m happy knowing I did that.” 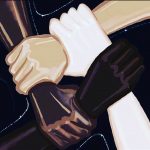 The Phi Beta Chi Chapter at Radford University hosted a fundraiser for the Bail Project which combats mass incarceration through a National Revolving Bail Fund. Over the course of seventy-two hours, the Chapter raised $1050.33 for the Project. When discussing the donation on their social media, the Chapter said, “This fundraiser isn’t our primary philanthropy for the upcoming year. We have plans to do several fundraisers throughout the year to further not only this cause but many others.” Additionally, if you are able to, one of the Chapter Brothers issued a very heartfelt and well spoken statement about these troubled times. Thank you for your words Brother Moffo.

At the University of Pennsylvania (Phi Phi), the Chapter cosponsored, with other organizations on campus, a fundraiser for Black Lives Matter, the Know Your Rights Camp, and the ACLU. Overall they raised $470. Also in Philadelphia, the Alpha Phi Alpha Chapter at Thomas Jefferson University raised $107 for “Color of Change”, which is a civil rights advocacy organization.

Across the river in Camden, New Jersey, the Alpha Phi Eta Chapter at Rutgers University – Camden also hosted a joint fundraiser. Gathering the resources of all of the fraternities and sororities on campus, the Chapter helped raise $3594 for the NAACP Legal Defense Fund. The Chapter said when making the donation, “This is a number we never expected to see! It is a small step in trying to make a difference in our country, but a step we could not take [alone].” 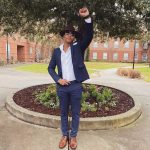 Finally, the Coastal Carolina Colony raised $75 for the National Black Child Development Institute. The idea for the fundraiser came from members Tom Jahnke and Patrick Sarin. The Colony, when posting the donation, said that it will continue to make history, break stigmas, and keep moving forward at Coastal. Additionally, the Coastal Carolina Colony has made history with electing an Afro-Latino man as the first Colony president: Isaiah Davis. Isaiah, when asked about him making history, said, “I am proud and honored to be the first Afro-Latino Colony president in Alpha Chi Rho history. I have to give all the glory to God. Change is TODAY, not tomorrow, or the next. Let’s strive to leave the world better than we found it. I am proud to lead these amazing men [towards] a better tomorrow.”

The Fraternity wants to thank all of our men who have continued to challenge the systemic racism in our country. Again, this is only the start of a conversation and the greater movement. If you would like to continue to help and champion these efforts, please email Nicolas Hewgley at nrhewgley@alphachriho.org.